A single touch-screen monitor on an adjustable arm, typically ranging in size from 21.5 inches to 23 inches.  These are typically located in standard presentation classrooms that have been updated from the summer of 2015 and later.

Generally speaking, lecture halls or large classrooms with complicated systems require additional space for all of their equipment to be stored.  As a result, the podium surface area increases, which allows the accommodation of two podium monitors mounted on top of the podium.  The left or primary podium monitor will at all times show the Podium Computer's desktop.  With the addition of the second monitor on the right side of the podium, we are afforded more flexibility as to what can be previewed.  The second monitor typically displays the podium computer's extended desktop.  It also serves as a preview monitor for other system sources such as the document camera.  Please review the system training documentation for your specific room for more information. 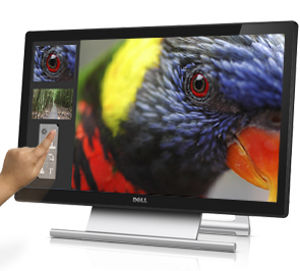 Two touch-screen monitors - Either the primary or extended desktop of the podium computer can be interacted with using the capacitive touch functionality of these monitors.  Either finger or capacitive touch stylus can be used with these monitors. NOTE:  When the secondary podium monitor (right monitor) is being used as a preview monitor for other sources like the document camera, the touch interaction will still communicate with the extended desktop of the computer.  It does not annotate the preview content.